With my mother tongue Japanese, it's hard to pronounce English in a correct way. I can easily tell the other way around is also the same case — how hard it is to pronounce Japanese for people whose first languages are not Japanese.

There are some reasons that make it harder for you: maybe you don't have a good teacher; there is a huge difference of pronunciation between your mother tongue and Japanese; you can't find a good textbook to get the correct pronunciation.

Although anything could be the reason, I personally believe that "romaji" is one of the biggest cause for the difficulty. Romaji is the language that romanizes the Japanese written language. The more I get used to English pronunciations, the more I feel something is wrong with Romaji — not only me but some people complain about romaji(e.g. How Romaji Can Ruin Your Day).

I can never pronounce Japanese correctly when I pronounce romaji in the English way. If you pronounce "raion" to say the word "ライオン"(which means "lion"), some of Japanese people probably wouldn't be able to understand what you have just said. Unfortunately, in almost all the textbook to learn Japanese, romaji is used to explain how to pronounce Japanese.

I am not an expert of phonetics or pyhonology, which might make you think like "Can I believe what this guy is saying?". But I still believe that I might have more advantage to give you a new and better idea, which you can't get from phonetic experts who would probably give you the already fixed and generalized knowledge.

From my experiences, I strongly recommend you to learn the pronunciation without referring to your mother tongue, because the pronunciation of Japanese is not exactly the same as that of other languages although some of them seem very similar. And if you keep referring to your mother tongue, it will be so hard to get rid of your strong accent to be a better Japanese speaker.

But at the same time, I'm sure if you refer to your mother tongue in a proper way — which is I am giving you in this article, you would pronounce Japanese a lot better than when you pronounce romaji. I believe and I am hoping my advice helps you guys improve your pronunciation.

Here it is. I made tables showing the similar sounds of English to Japanesse ひらがな and カタカナ on the Excel file below.
Dropbox - Reference of Japanese Pronunciation.xlsx

You can see which pronunciation of the "British English" words are close to each sound of Japanesse letter, like the image below shows you.
* I have to ask you to pronounce any English words on the tables with British accent because I feel British pronunciation is the closest to Japanese. I am sorry for those who are not used to British accent. 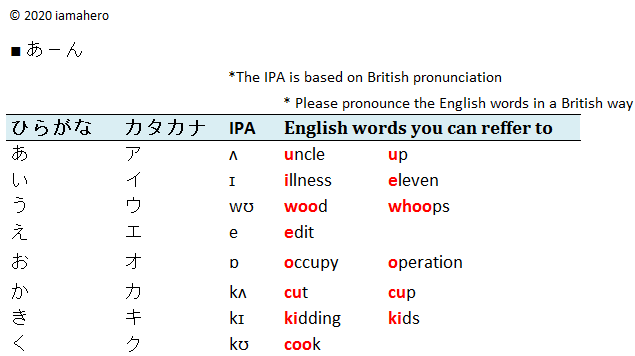 If you want to get the points quickly, here is the summary of the idea.

Using IPA(International Phonetic Alphabet) for British English, I would write the pronunciation like this.

In Wikipedia, there's a vowel chart showing the vowels of "Standard Japanese (not having dialects or accents)" by Okada 1999.

You can see that in the article of "Japanese phonology" in Wikipedia, and the chart shows where the tongue should lie and how much the mouth should open. There's a small difference of the vowel sound between the chart and my idea above, which means my idea is technically not perfect. But still, I believe that helps you pronounce Japanese better.

Romaji spells "ら り る れ ろ" "ra ri ru re ro" which makes you confused. Well, trust me. The sounds of "ら り る れ ろ" are more similar to the sounds when you pronounce "L" instead of "R". Actually, they are not exactly the same as L sound because the tongue doesn't touch the teeth when we pronounce them. The tongue touchs the roof of the mouth just behind the teeth instead.

When you pronounce Japanese, forget about romaji and see each "Japanese" letter and pronounce it in the Japanese way, or referring to the excel data that I put below — like こ co(p)/ ん (Mm...)/ に ni(ckel)/ ち chi(cken)/ は wo(nder).

I believe my advice above helps you guys somewhat. As yet, I strongly recommend you to get the pronunciation without referring to your mother tongue, as I mentioned before.

You can see more tips of Japanese pronunciation from the refference below.

This web page below gives you lots of important points of Japanese pronunciations, from basics to detailed tips.

This one below is about "Japanese phonology" in Wikipedia, which is very detailed imformation.